The chateaux of Charente will transport you back in time

Discover the 10 most beautiful french castles of Charente. In the imposing medieval châteaux the spirit of knights and nobles still lingers. This is temples to art and Italian sophistication built during the Renaissance. These magnificent monuments offer unexpected experiences!

Remarkably restored, the rotund Saint-Jean-d’Angle fortified castle is a rare example of a château with a shell keep. They are built at the end of the 12th century to protect the salt marshes. Its history is intertwined with that of the Lusignan family. The last one can thank Melusine, a fairy of European folklore, for their huge fortune. From the guard room to the ramparts, weaponry, medieval garden and farmyard, you’ll quickly become experts in life in the Middle Ages. There’s a lot of child-friendly entertainment: puzzles, trebuchets and even costumes to turn the whole family into princesses and knights!

Château de Crazannes, the Castle of Puss in Boots

Between Rochefort and Saintes, this remarkable 14th century castle was built on the site of an old feudal fortress, in the middle of eight hectares of parkland. Take the time to visit its Romanesque chapel, keep, moats, feudal dovecote and the fascinating Museum of Rural Objects. The château has five bedrooms and a converted gite in the keep. It belonged to Jules Gouffier, Marquis of Caravaz. The last was the inspiration for Charles Perrault’s Marquis of Carabas and master of Puss in Boots! 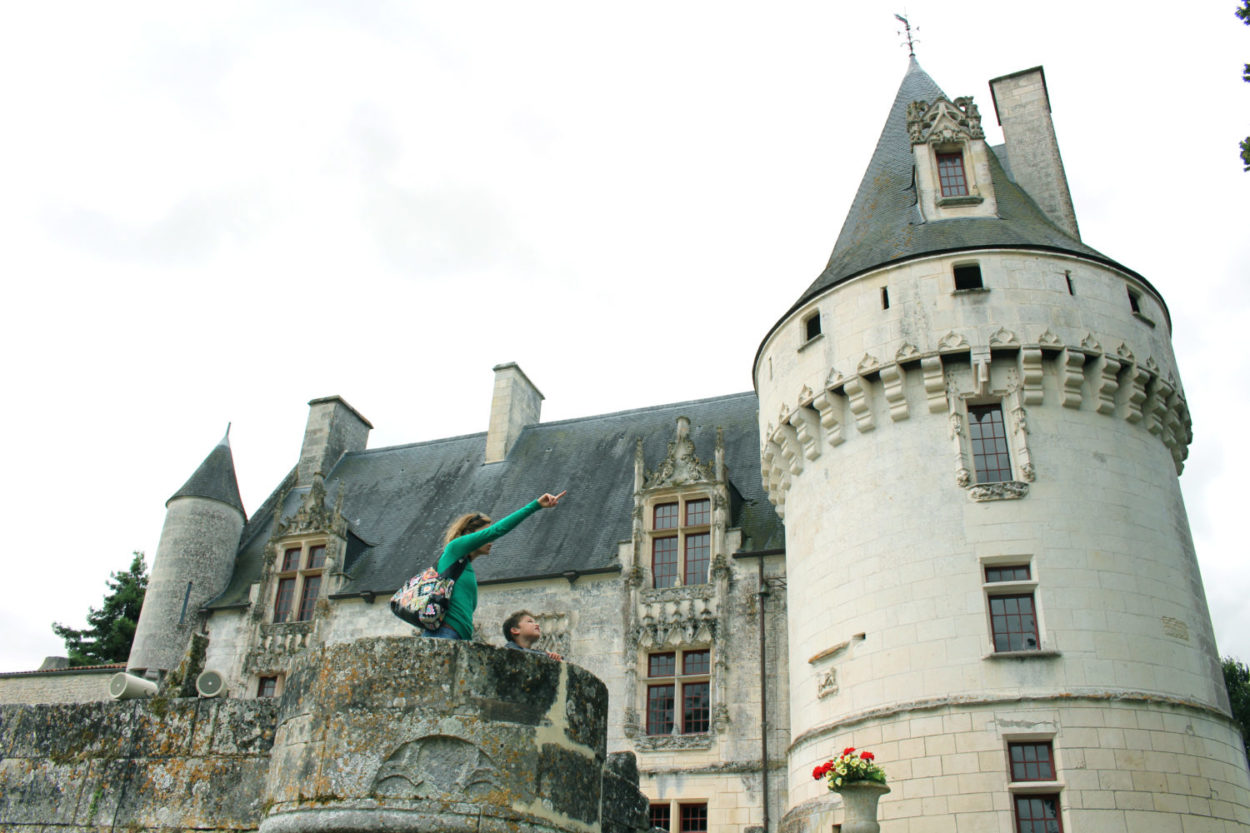 Head for one of the symbols of the Renaissance, built in the Middle Ages! With its open arcades overlooking the central courtyard and its impressive spiral staircase, the building was considered one of the five marvels of the Kingdom of France during the reign of Francis I. The château has been inhabited by the La Rochefoucauld family for almost 1,000 years!  Don the clothes of a knight or a princess and explore the furnished rooms, well-stocked libraries, kitchens and Melusine’s cave. The faint of heart need not apply! 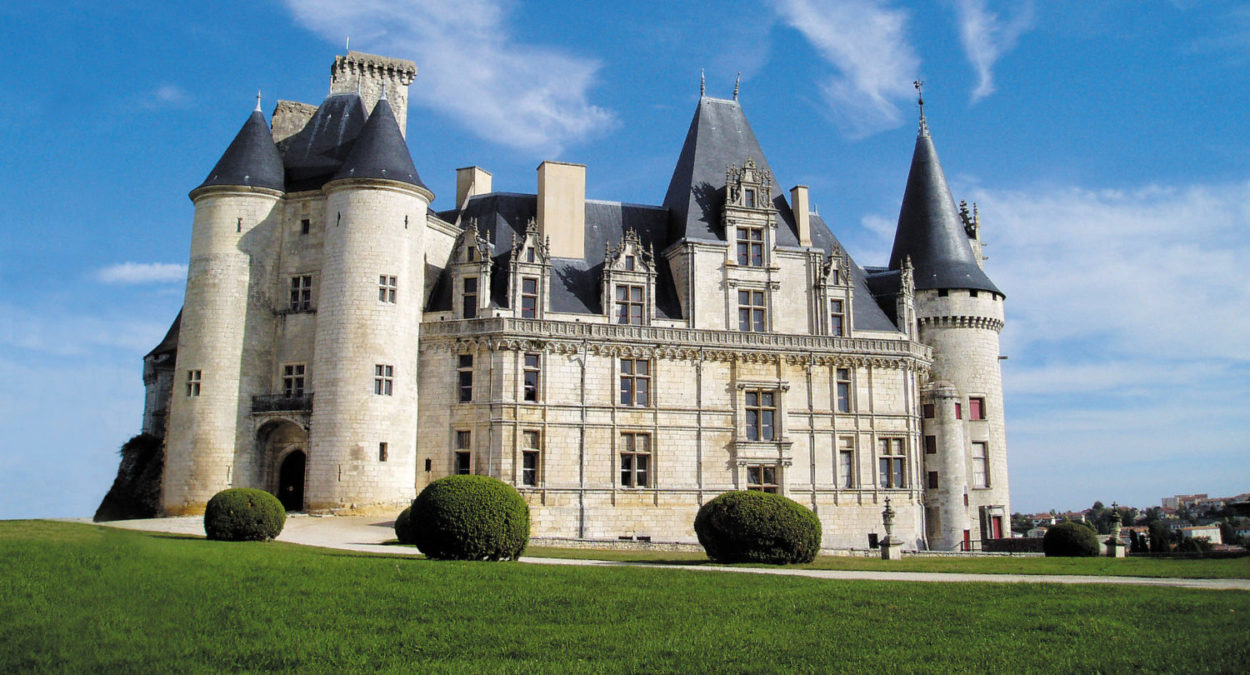 Château de Chalais, one of castles of Charente

This imposing château, home to the Talleyrand-Périgord family, overlooks the town of Chalais from its rocky outcrop. The court is accessed via a rare 16th century drawbridge, which is still operated each day. The tall 14th century square tower has a mansard roof, like the rest of the château. Since 2012, the building has belonged to comedian Yves Lecoq, who has carried out extensive renovation work and refurnished much of the château using period items. If you want to take an exciting leap into French history, this is the place!

The Château de Rochebrune stands proudly to the east of Chabanais, just a stone’s throw from Limousin. Hidden behind its moats, which glimmer with the reflection of four huge corner towers, this picturesque building houses artefacts from the Napoleonic campaigns of Count Pierre Dupont de L’Étang, general and former owner of the château. Don’t miss the dining and weapons rooms, the stone fireplace, the painted ceilings and the coats of arms of the Princes of Chabanais. 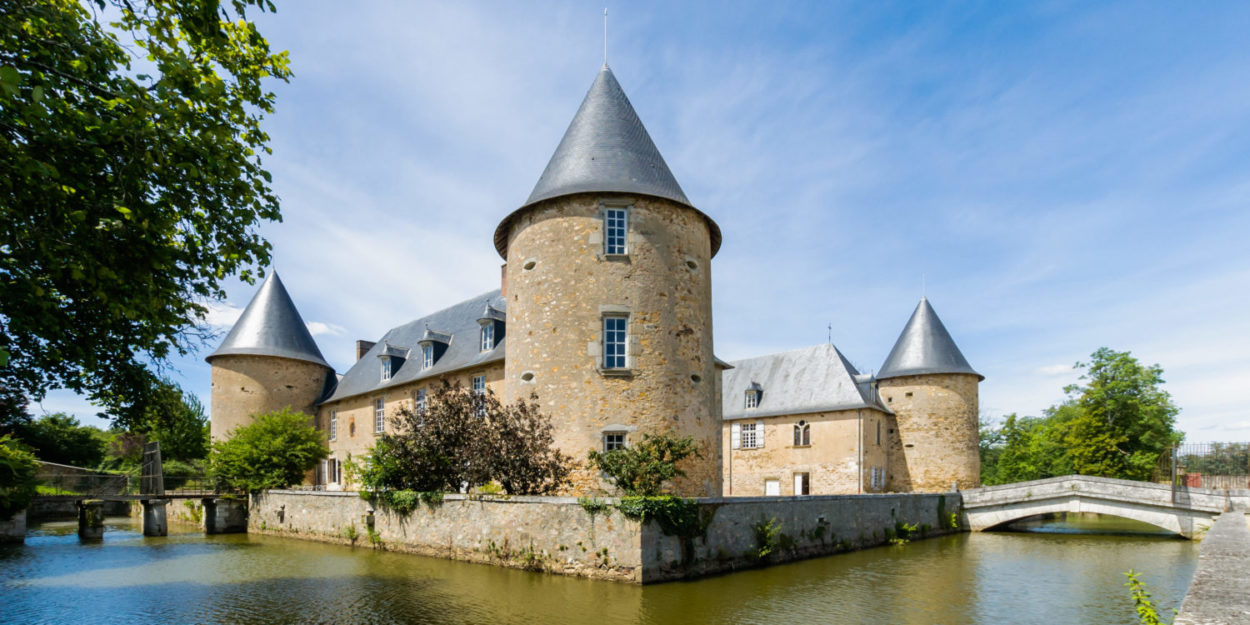 Built at the top of the Puy Sanseau hill, this building rises almost 200 metres above the undulating landscape below, making for spectacular views. Four castles have stood on this strategic site over the last thousand years. The impressive crenelated outer wall, punctuated by seven towers, shelters an exceptional architectural complex. Don’t miss the Romanesque chapel and the huge farmyard, which offered protection to the château-dwellers in the event of an attack. 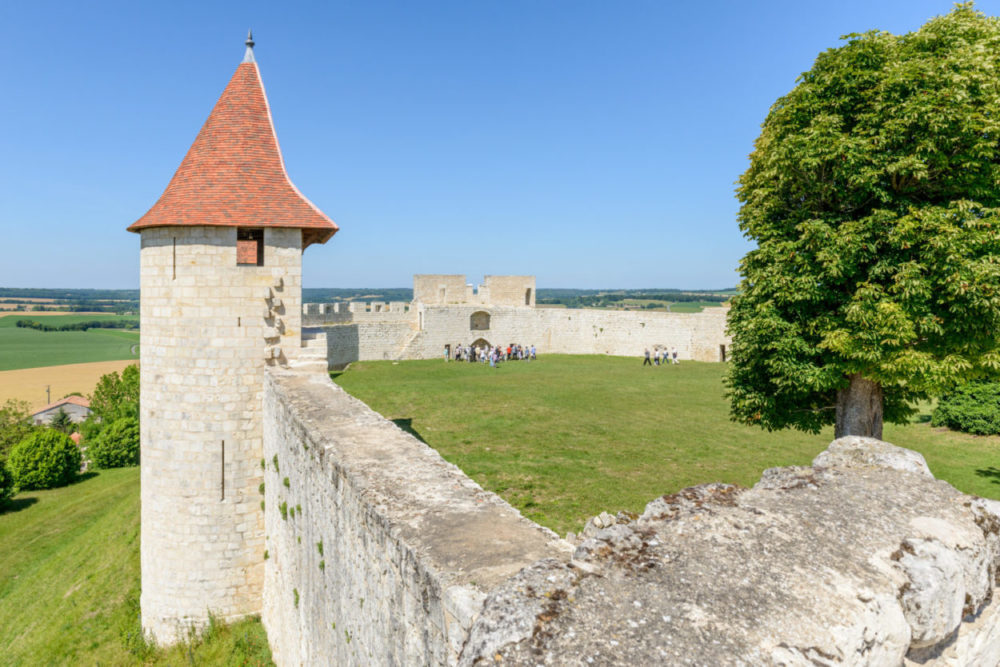 Discover the secrets of this superb Renaissance château that really stands out from the crowd! The “Château of Mysteries” is a theme park where you can learn while also having fun.

For three hours, you’ll explore Château d’Usson during a scavenger hunt, as a family or with friends. Sharpen your mind, hone your powers of observation and dive into a thrilling historical mystery! There are a total of 27 puzzles to mull over as a family and build team spirit over three hours (suitable for children aged four and over).

Don’t miss the Escape Castle escape room. Locked inside the Marquis d’Usson’s antechamber, you’ve got just 60 minutes to solve a range of perplexing mysteries and break out of the room. Ready? The clock’s ticking! 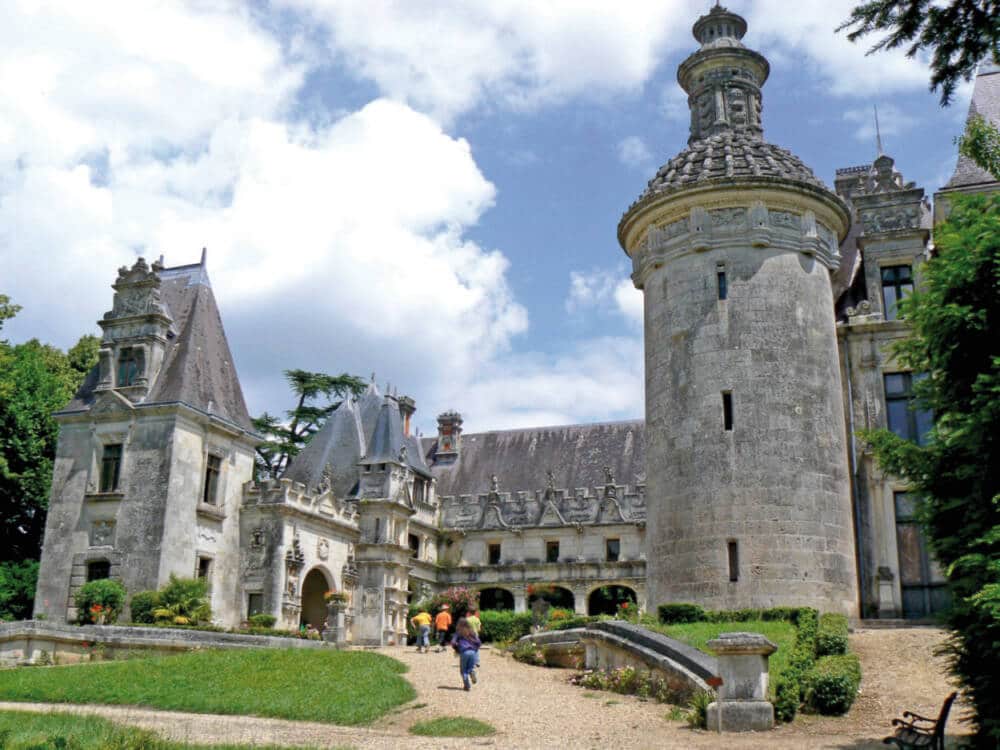 A Renaissance gem nestled in a maze of enchanted islands, this château is famed for its island gardens and its double gallery with a mysterious esoteric ceiling. Château de Dampierre is the perfect setting for a romantic stroll and also offers family-friendly walking trails through its grounds. 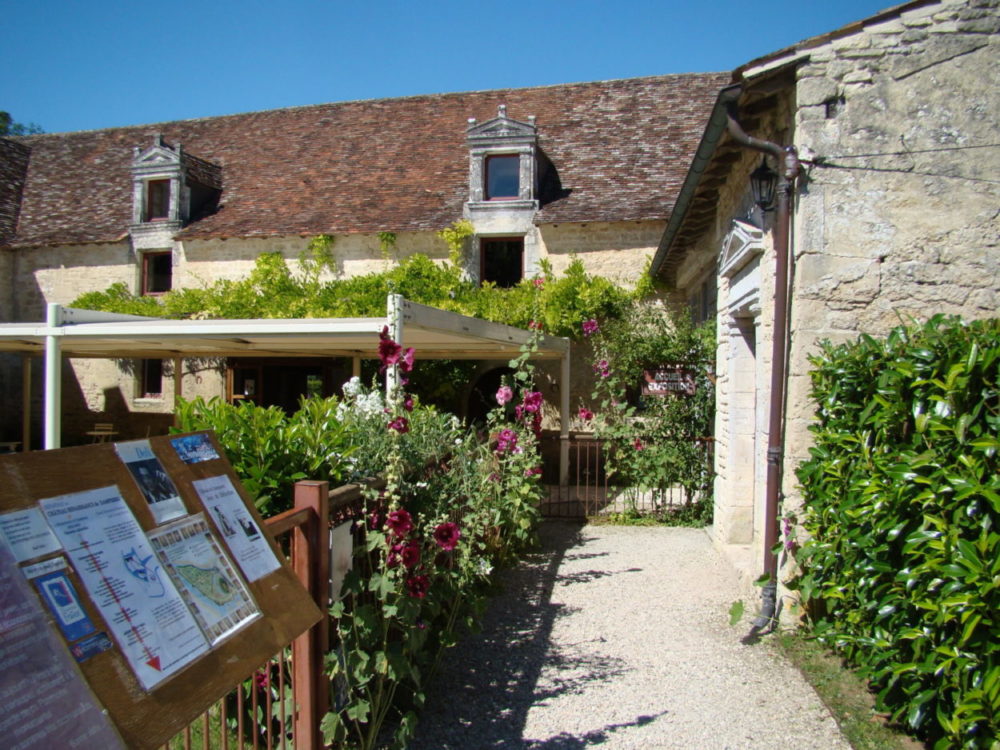 Built in the 15th century in the midst of an ancient forest, the château was converted into a country house in the 17th century by the Marquis of Courbon. This majestic Renaissance château, which is still inhabited, is entirely furnished and surrounded by superb, officially listed formal gardens. Located on marshy ground, these gardens are unique for being built on stilts! But there are plenty of surprises still to come at Roche Courbon. It’s also a major archaeological site with prehistoric caves, the remains of a Gallo-Roman village and even a Merovingian necropolis. Many entertaining activities let you explore the site with children. An escape room, called Castle Game, has been launched: locked in one of the château’s rooms, you’ll have exactly one hour to escape by solving a series of mysteries – game on! It is one of the most famous castles in Charente. 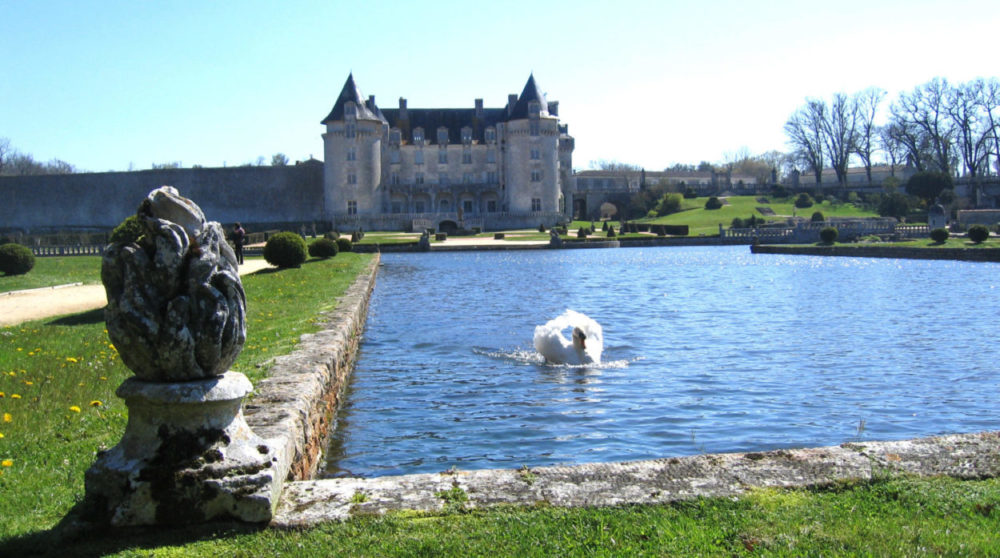 The last of Charente’s catles is Château de la Mercerie. This château can’t be classified or pigeonholed, and it’s nicknamed “the little Versailles of Charente”. Its dazzling (but unfinished) white façade is 220 metres long and resembles a theatre in the middle of a green oasis. The story begins in 1924: when Alphonse and Raymond Réthoré bought the little 19th-century manor house, they dreamed of created a new Versailles. Nothing was too beautiful, or too expensive, for their huge ambition, neither colonnades and balusters, nor luxurious woods and Italian marble or a superb collection of Spanish tiles (which are happily still visible). Eventually the two brothers were ruined and would never realise their dream, which was ultimately forgotten. Sadly, their only achievement was the right to be laid to rest on their estate for eternity. However, in 2011 local residents banded together to restore and improve this unique piece of heritage. Thanks to their efforts and unwavering dedication, the Château de la Mercerie regained its former splendour and today welcomes thousands of visitors. 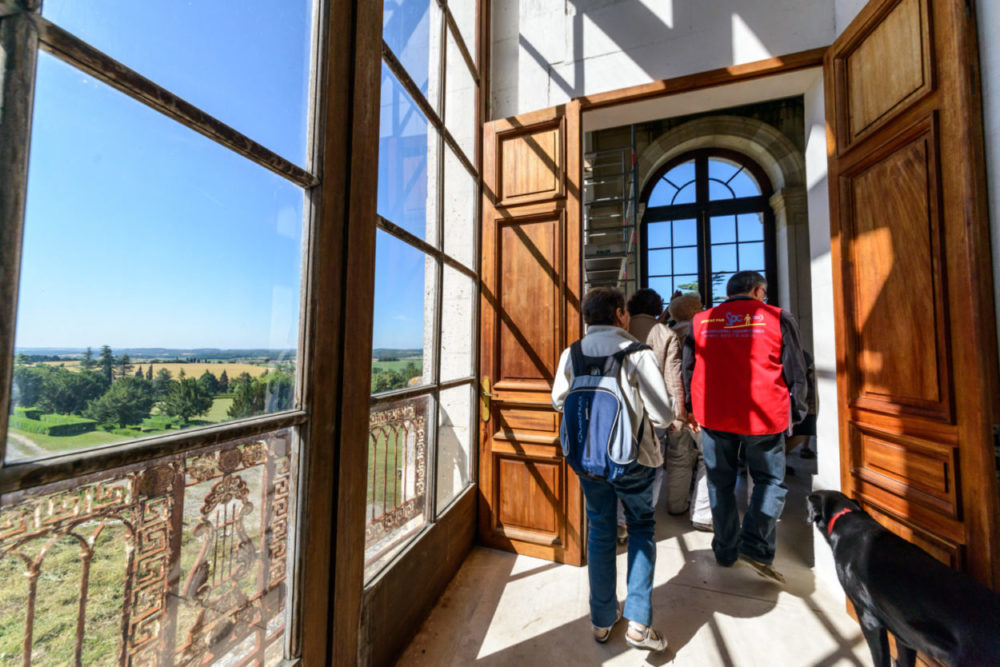